What (Exactly) Should I Teach My Family? 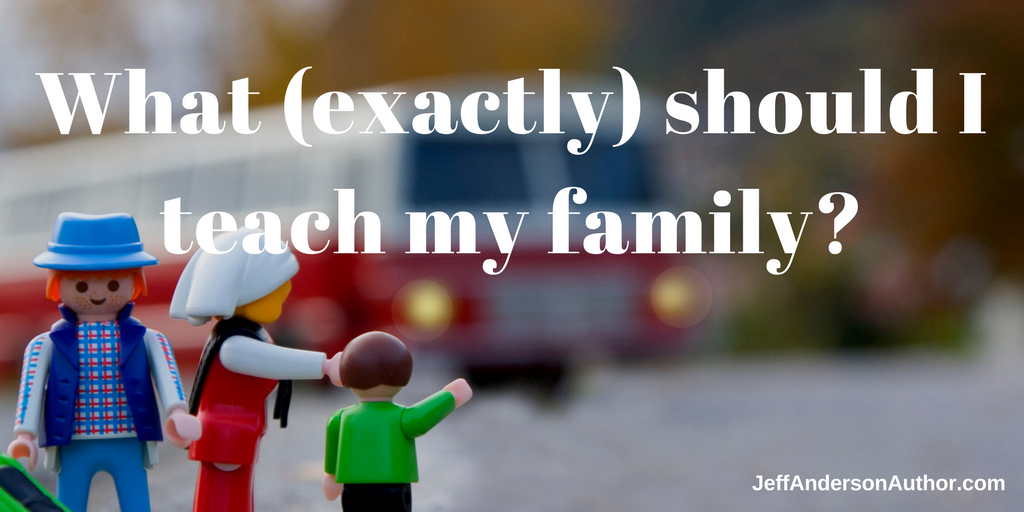 As parents, we’re on the lookout for things that might harm our kids. It’s instinctive to annihilate dangers in their path: germs, foods additives, diseases, preservatives, and a steady diet of sugar.

I’m pretty sure Stephanie and I will give our future grandkids plenty of cookies and ice cream, but right now it drives us crazy when the grandparents hand out candy.

Like families of faith, we try to protect our children from worldly culture (don’t listen to that music… don’t watch that show). And we’re good at sin management, too (don’t lie, don’t talk back, don’t engage in such and such behavior…).

What if there was something causing harm to our children’s faith?

Often, without realizing it, we’re not as protecting in the area of faith. We should be helping our children understand biblical truth.

The growing epidemic today is Biblical illiteracy. This might sound as interesting as the national debt. The problem is, we’ve not connected this epidemic (biblical illiteracy) to the bigger outcome: kids walking away from faith.

Instead, we blame that on culture, weak church models, ineffective youth ministry, college professors, government, and the entertainment industry.

It’s time we recognize the connection–and get serious in protecting our kids.

It’s not enough for kids today to be raised in church, fed church activities, and even learn scripture memory. They must be raised to revere God’s word as God himself, and to wrestle with God’s truth

The battle being waged today is for truth. The traditional evangelical view is that the Bible is the authority for truth. The emerging view is one of moral relativism. Truth is relative; you determine your own truth.

This is far more dangerous than the rebellious eras of the past. At least rebellious behavior admits it’s rebelling from a standard. But a biblically illiterate deception is a dangerous path that leads further and further away from God. Even if it seems to be about God…

The mainstream is now polluted

According to Barna Research, “what used to be basic, universally-known truths about Christianity are now unknown mysteries to a large, and growing, share of Americans–especially young adults. The theological free-for-all that is encroaching in Protestant churches nationwide suggests the coming decade will be a time of unparalleled theological diversity and inconsistency.”

Bible college professors say that each incoming freshman class knows basically less about the Bible than the class before. Christian school teachers say the same. Regardless of the study or the method for understanding biblical literacy, the conclusion is the same. Biblical literacy is in decline.

In other words, don’t be fooled into thinking that because your kids have a Bible app and a youth group they are rooted in faith.

It’s not an abrupt rebellious shift that happens one day in college. It’s a slow fade. And it starts with lackadaisical treatment of God’s word in the home.

I remember my pastor asked, “Do you have a strategy for teaching biblical truth to your children?”

A strategy? Huh. I never thought of it that way. How about you?

The word strategy changes the conversation. I could ask, Do you exercise? Do you eat healthy? or I could ask, What is your strategy for maintaining good health?

Do you have a strategy for instilling truth in your home? What is it… exactly?

It’s harder to walk away from something than it is to walk toward something.  Many kids today are not walking away from solid faith. They’ve simply not been grounded in truth, so it’s an easy walk toward moral relativism, false faith, and humanism. They’re not rejecting faith as much as they’re selecting something else.

This doesn’t mean they wont have questions, doubts, and seasons where faith is tested. But they’ll be better equipped to survive those seasons if they have a strong root system.

I want to share a five-part strategy on (exactly) how to lead your family into a deeply rooted, literate, faith. Specifically, I want to share five pillars of truth that can help your children avoid being among the growing community of biblically illiterate youth.  It’s simpler than you think.

Stay tuned here, or subscribe to my newsletter to receive the next five posts!