Joseph, Did You Know?

Naturally, when it comes to the Christmas story, Mary receives most of the attention. A virgin teenage mother gives birth to the Christ child—what a headline!

Often Joseph appears as a tag-along character, with donkeys, shepherds, and wise guys. But Joseph’s role in the story, and his unique ancestry, is monumental.

The “pass over” scriptures

The first chapter of the Gospel of Matthew begins with these “riveting” words: “The book of the genealogy of Jesus Christ, the son of David, the son of Abraham.”

Sorry, did I just yawn? Did you? Seventeen verses later, the real story is revealed: “Now the birth of Jesus Christ took place in this way”

The first seventeen verses of Matthew might not seem like part of the Christmas story, but what if we explored this genealogy in a new (star) light? Every name in this lineage represents the pass of the “baton” so to speak. Every generation represents triumph over vicious attack.

Between the fall of man and the Second Adam(Jesus) were 4,000 years of silent nights.

Joseph’s lineage was from the line of the kings. Mary’s ancestors were not. Joseph’s position in the line of The Seed was crucial to fulfilling the Davidic covenant—Jesus would come from a line of kings so David’s kingdom could endure forever.

I love the Christmas song, Mary Did You Know? But the Advent Journey has me thinking more about Joseph.

I wonder what Joseph knew? How much did Joseph understand about his unique role in history?

Joseph surely knew his lineage and where he came from. His angel encounter made some of this clear. “Joseph, son of David, do not fear to take Mary as your wife, for that which is conceived in her is from the Holy Spirit. She will bear a son, and you shall call his name Jesus, for he will save his people from their sins.”  (Matthew 1:20-21) But I imagine it took time for him to fully process all that was happening and what it all meant—to be the earthly father to this Christ child.

Joseph did you know…

We all know about Abraham’s call and faithful journey to a new land. Moses’ leadership of the Israelites from Egypt to the promised land is a Sunday School staple. But have you considered the crucial ways Joseph led the Seed to safety?

Yet again, after the birth of Jesus, “an angel of the Lord appeared to Joseph in a dream and said, ‘Rise, take the child and his mother, and flee to Egypt’…” (Matthew 2:13)

Along the way to Israel, Joseph “heard that Archelaus was reigning over Judea in place of his father Herod, he was afraid to go there, and being warned in a dream he withdrew to the district of Galilee.” (Matt. 2:19-22)

Joseph’s quiet, obedient nature is legendary. He was a quiet warrior… a fitting finish for this spectacular Seed journey through sixty-four generations. His role was another in the line of epic battles foretold in the Garden of Eden.

I look forward to my own conversation with Joseph one day in heaven, to ask him questions about what he knew. He may not have fought with a sword, but he certainly battled for his wife and family. Can you imagine an angel telling you that your then-fiancé was pregnant—and the father was… God?

How do you see Joseph differently now that you understand his position in the journey of the Seed?

You can also read An Advent Journey on Kindle. Click here to buy on Amazon. 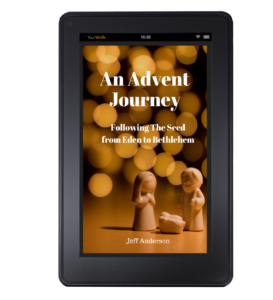